Flutter is Google’s new open-source toolkit for helping developers build iOS and Android apps with just one codebase. Flutter apps are written in the Dart programming language and compile to native code, so the performance is really, really great.

In this tutorial, I will show you how to use Flutter to build an app that shows the current price of different cryptocurrencies. I will walk you through the fundamentals of Flutter and Dart. 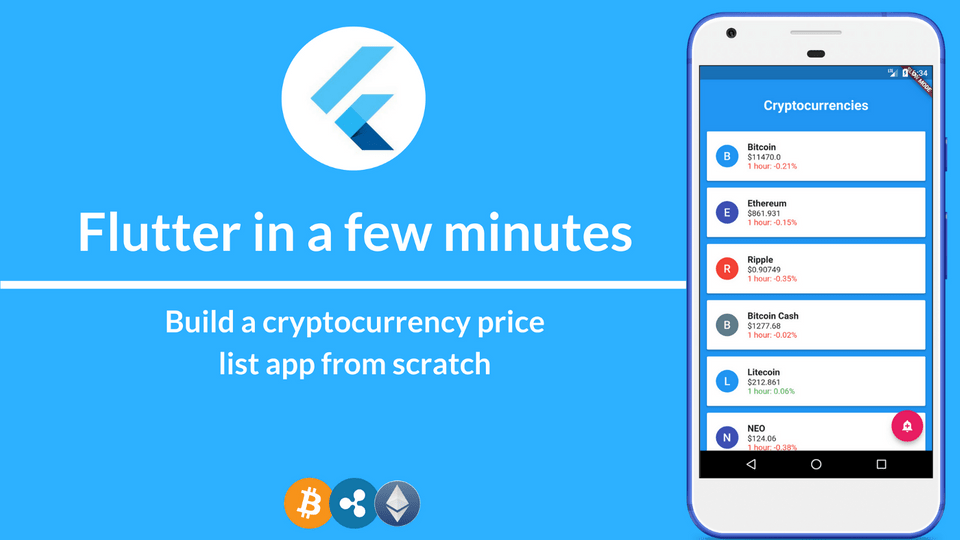 Before we start, install Flutter and the Flutter editor plugin if you haven’t done so already. The installation should be straight-forward, but if you bump into issues you can leave a comment on this post and I will be glad to help out.

For this tutorial, I will be using Android Studio, but you can also use IntelliJ or Visual Studio Code.

Also, some object-oriented programming (OOP) experience is required. Relax! You don’t need years of experience — if you know what classes and objects are, you should be fine.

On Android Studio or IntelliJ, click on the File menu -> New -> New Flutter Project. If you don’t see the New Flutter Project option, ensure you have installed the Flutter plugin. If you are using Visual Studio Code, follow the steps here to create a new project.

When the page opens, select Flutter Application and click on the Next button.

The next page lets you configure the project. You can use a similar configuration like the image below. Just ensure that the Flutter SDK path points to the directory where you downloaded Flutter.

The last page lets you configure your company domain name, and you can set it to any domain name. After that, click on the Finish button.

The project creation should begin after clicking the finish button, which usually takes a few minutes.

When it’s done, your project should look like this.

A file called main.dart was created in the lib folder. It contains code for a demo app. Since we will be building our app from scratch, open up the main.dart file and delete/clear all the code in it.

If your project includes a test directory that contains the file widget_test.dart, delete this file before continuing. It contains tests for the code we just deleted.

Flutter apps are written in the Dart programming language. The main.dart file is a Dart source file (.dart extension). The Dart convention is to name source files using lowercase_with_underscores.

Let’s start writing some Dart code. We will begin with the programming tradition: printing “Hello World!”

To do that we will have to create something called the main function. The main function is a top-level function that every Flutter app has that serves as the entry point into your app. Think of it like the entrance to a house. 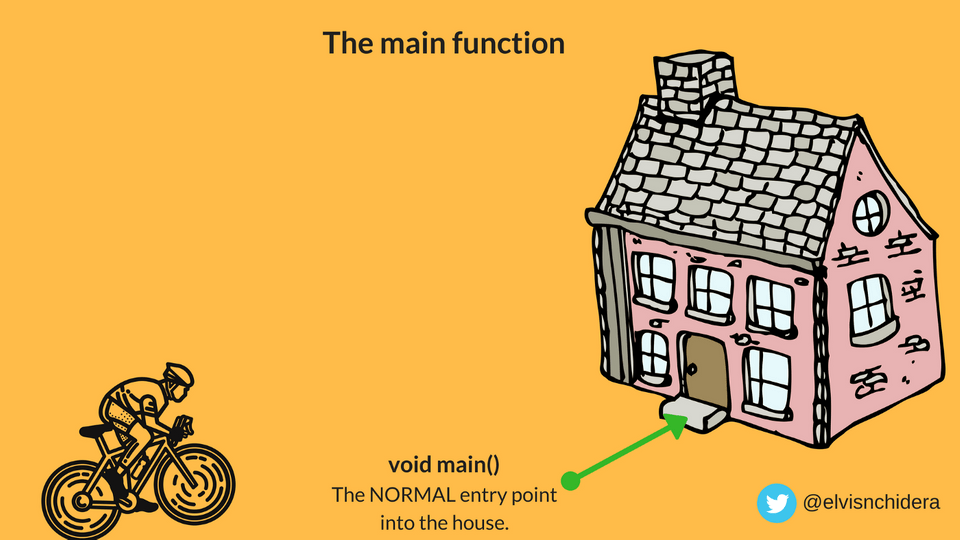 When you run your app on a device, execution will start from the main function. Let’s create a simple main function, so enter the following code into your main.dart file.

The third line does the printing to the console. We call the print function and pass a string argument to it. Note that in Dart, you can use single quotes (‘string’) or double quotes (“string”) when declaring a string literal.

To run the code, click on the green run (play) button at the top of Android Studio or IntelliJ. Ensure you have an actual device connected or you have an emulator running.

After the app successfully starts, you should see “Hello World!” printed on the console.

But if you check your device or emulator, you will see something disappointing. 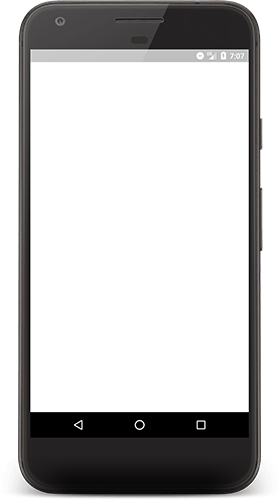 Well, this was expected, as we are currently only printing to the console. There was nothing added to the app UI, and that is why it is blank.

So let’s fix this by adding some elements to the app UI. Our app will be using material design, so let’s add a package to the main.dart file to help with that.

Just like any modern programming language, you can import a library/package to use in your code. Here we are importing the material.dart package. This package contains code that helps us create a material styled app.

The material.dart package has a function called runApp. The runApp takes a widget and attaches it to the screen. Well, what is a widget?

You can think of widgets as views or UI elements. They are the things you see (and some you don’t see) when you run your app on a device. In Flutter, you will be using widgets a lot, because the main idea is that your app UI is made entirely out of widgets.

Flutter already comes with a suite of powerful widgets like text and images. The material.dart package we just imported has several material design widgets that we will be using shortly.

Let’s use the runApp method now to show “Hello World!” at the center of the device screen. Replace the content of the main function with the code below. 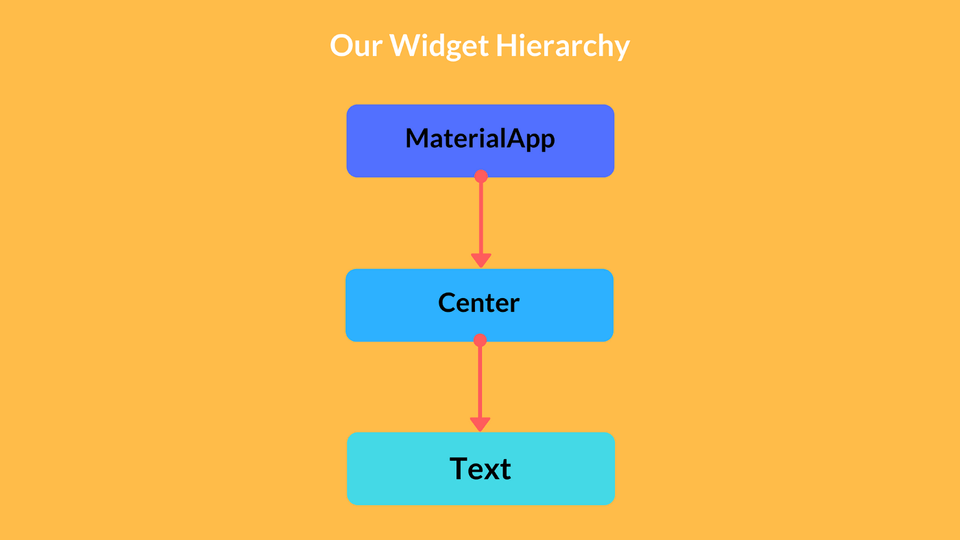 If you run the code again and open up your device, you should get a slightly better screen now. 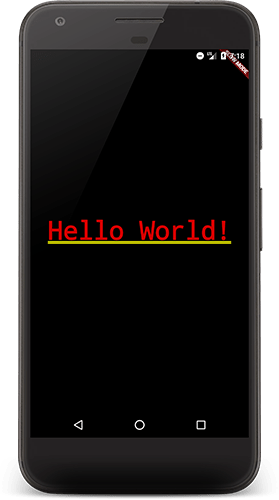 Cool! We were able to show an ugly looking text centered on the device screen.

Let’s take a few steps forward now. We will be getting the cryptocurrency prices from the CoinMarketCap API. The API returns a JSON array. Here is a sample response from the API:

We will be making a request to the CoinMarketCap API and decoding the JSON from the app. We will have to include a couple of new packages to the main.dart file.

Here’s an overview of the new packages:

Let’s add a new function to the main.dart file that makes a request to the CoinMarketCap API.

Let’s walk through the new code

-> Future<List> : We are basically saying that the getCurrencies() function will return a List sometime in the future. It will make an HTTP request to the CoinMarketCap API and return a List of currencies when done.

The getCurrencies() function is asynchronous. If you have some JavaScript experience, you can think of Futures as Promises. I created the images below to help you understand Futures in Dart. 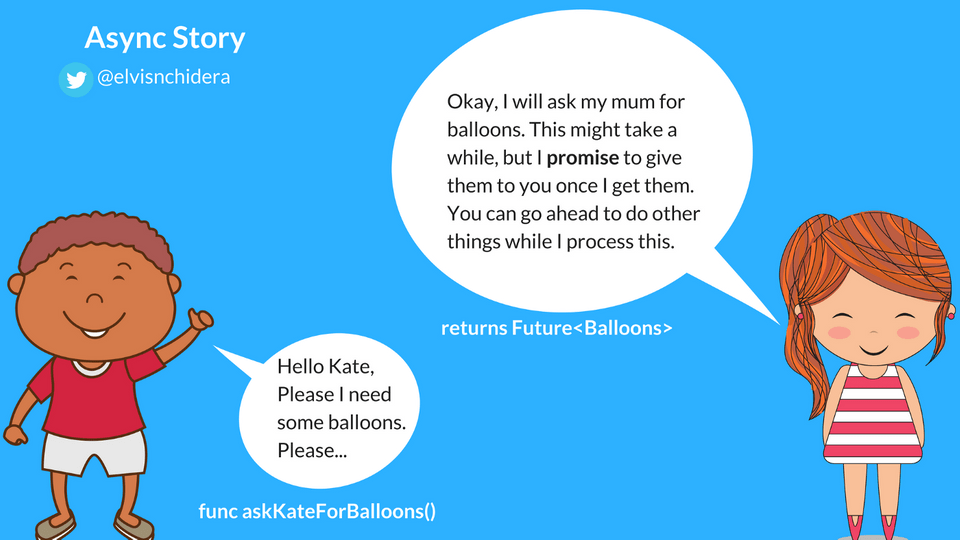 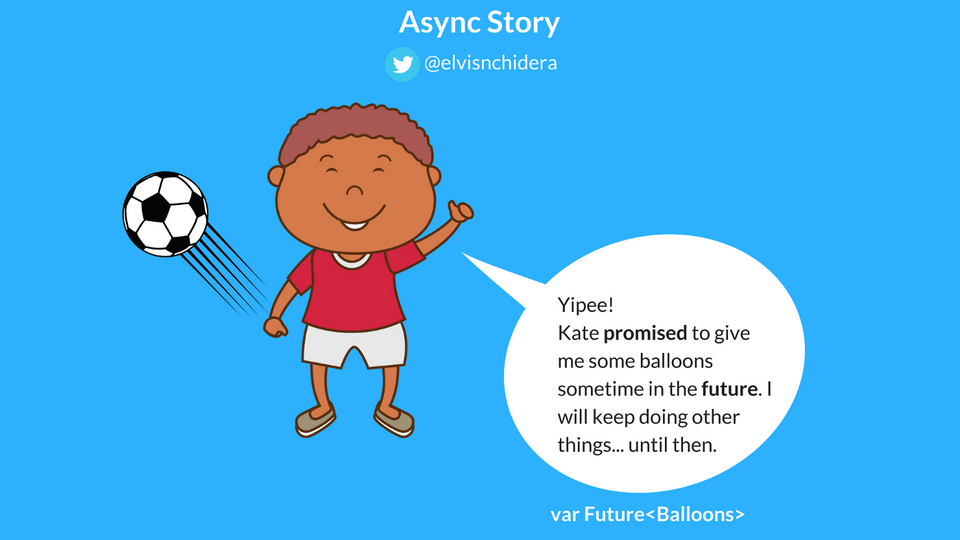 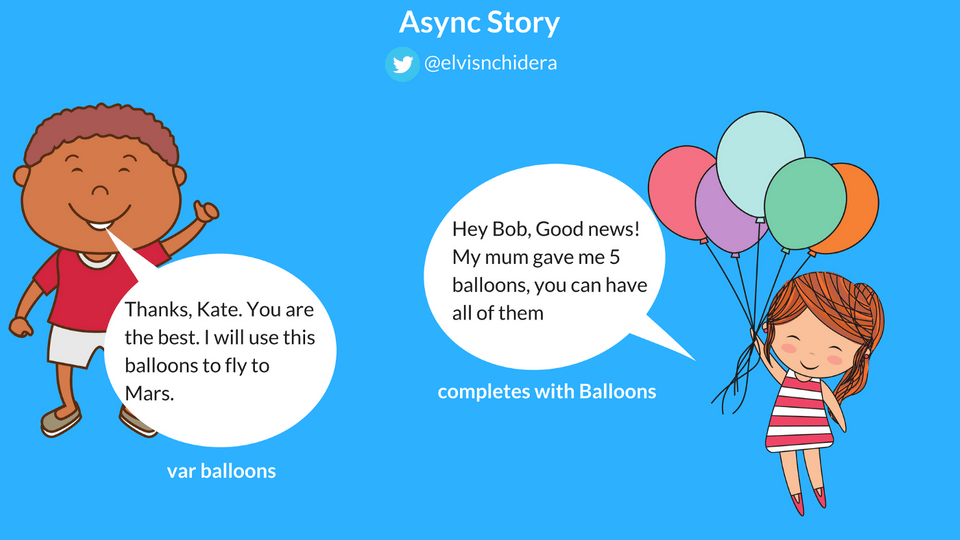 Await expressions let you write asynchronous code almost as if it were synchronous. The http.get(url) function is asynchronous, returning a Future<Response> immediately when it’s called. We want to wait for the Response so we can decode the JSON string, but we also don’t want to use ugly callbacks.

The await expression evaluates http.get(url), and then suspends the currently running function (getCurrencies()) until the result is ready — that is, until the Future has completed.

You can read more about async and await in Dart here.

-> http.get(url) : Makes a HTTP GET request to the CoinMarketCap API. This function is asynchronous and returns a Future immediately.

Let’s test the getCurrencies() function we just created. We do that by making a call to it in our main function and printing the returned value to the console.

If you run the code above, you should see the API response printed to the console.

Well, in the real world bad things can happen. For example, you might not be connected to the internet, so the request to the CoinMarketCap API will fail. For this tutorial, we will assume we are in Wakanda.

In a production app, you will have to handle network failure. You do that by putting the HTTP call in a try…catch block.

Building out the UI

Now that we have a list of currencies, let’s go ahead to build the UI to show that list.

When writing Flutter apps, you’ll usually create new widget classes. A widget’s main job is to implement a build function, which describes the widget in terms of other, lower-level widgets.

Let’s create a new Widget called CryptoListWidget. Add the code below to the bottom of your main.dart file.

Let’s walk through the new code above:

The Scaffold class provides APIs for showing drawers, floating an action button, bottom bar, snack bar, and so on. We will be adding a floating action button later. 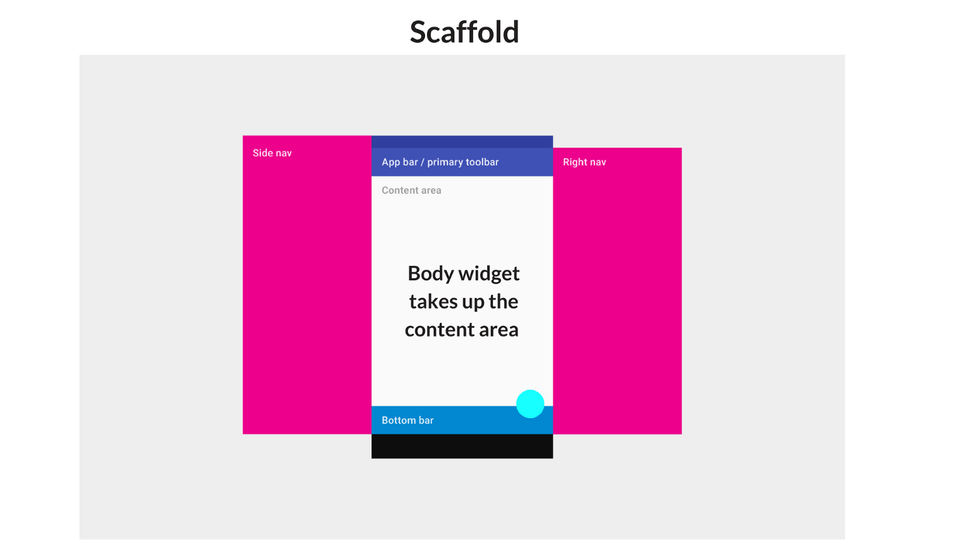 The syntax here should be familiar. We are using two new Widgets:

Let’s create the two functions we called in the _buildBody() function. The first one is _getAppTitleWidget() .

This function returns a regular Text widget with a style that makes it bold and white with a font size of 24.0.

The text is going to look like this when we run the app.

We can’t run the app yet because we haven’t created the other function called _getListViewWidget(). Let’s quickly create it using the code below.

The _getListViewWidget() returns a ListView widget that is wrapped in a Flexible widget. We use the ListView.builder to easily create the list. We pass in an itemCount which tells the builder how many currencies to show.

The itemBuilder callback will be called for each item and you have to return a new widget. In the code above we are calling a function called _getListItemWidget() that returns a Widget.

Before we create the _getListItemWidget() function, let’s quickly create the individual elements for the ListView item widget. We want each item in the ListView to look like this:

So, we have three main widgets:

Let’s create the widgets. For simplicity sake, I created a function for each of them. The first function called _getLeadingWidget() returns the round icon with the text. 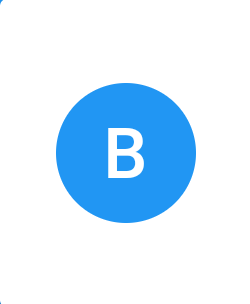 The second function called _getTitleWidget returns the Text widget for the currency name.

The third function called _getSubtitleWidget() returns the Text widget for the currency current price and percent change in 1 hour.

We will create a new function called _getListTile that returns a ListTile widget.

Finally, let’s create the _getListItemWidget() . It is going to return a Container widget that has a top padding of 5.0 and has a Card widget child. The card widget has the ListTile returned by _getListTile as it’s child.

We have successfully completed our CryptoListWidget. But we have to update the main function to show the newly created widget instead of the Text widget.

That’s it. You can hit the run button again. If everything works well and you are connected to the internet, you should a screen that looks like this. 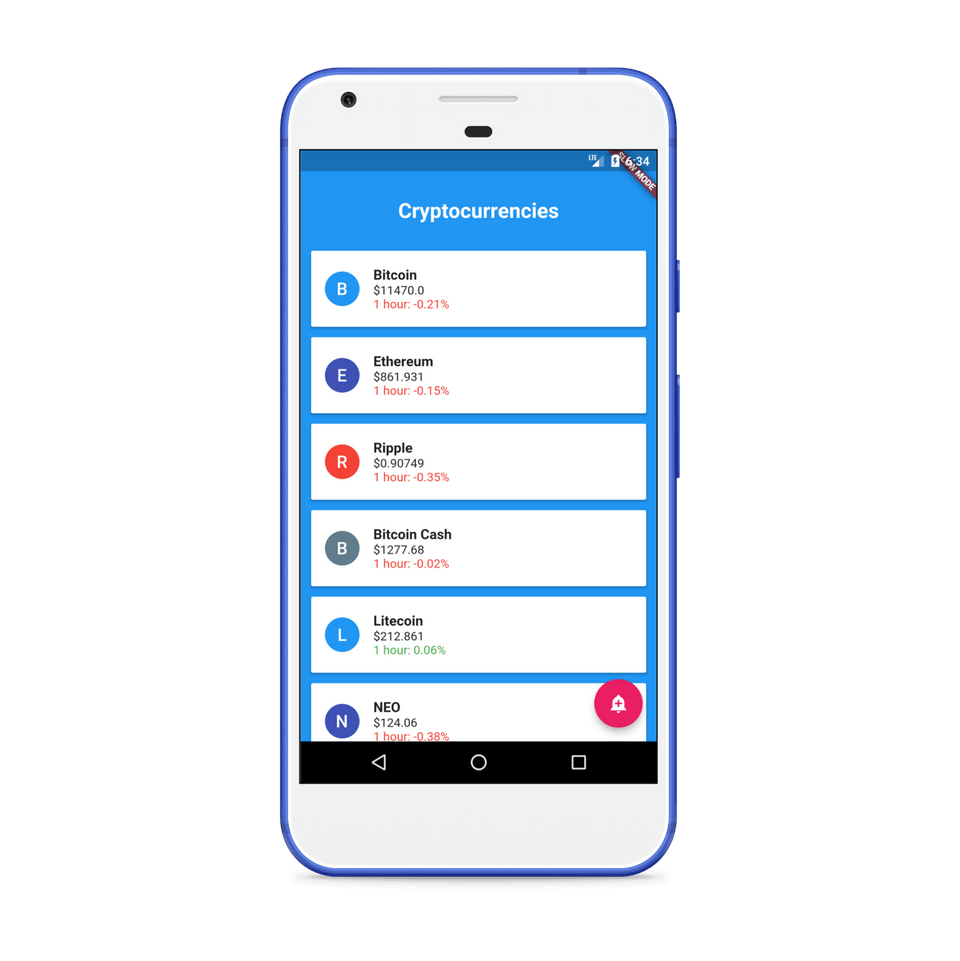 The app you see will be slightly different from the screenshot above:

I decided not to include them in the tutorial. But you can check the project Github repository to see how I was able to achieve it.

The completed app can be downloaded here.

Thanks for reading and hope you enjoy Flutter as much as I do.